I’ve always loved horses. Since I was a little girl, I’ve been fascinated with them. They’re big and powerful (I’m not) and at the same time elegant and graceful (yeah, not me either). They speak a language all their own, and if you want to hang around with them, you will learn their language, too.

I was fortunate enough to grow up with horses, but it wasn’t until I was in my 30’s that I finally figured out that they have so much to teach us, if we just listen. And I did not learn this lesson the easy way. No, three broken bones in my arm, surgery and lots of pain pills later, I decided that there had to be a better way. All my life I’d heard “teach ‘em who’s boss”. Oh yeah, I taught ‘em, alright.

Learn something from everyone, everything, and every situation. 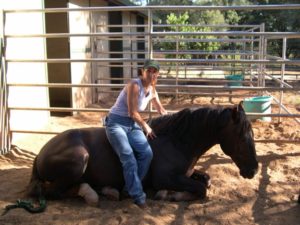 If you don’t have experience with horses, it might be hard to imagine what they could possibly teach us. We are, after all, the superior race, but animals are incredible in their ability to reach us in ways that even some humans cannot. There are three things about horses that everyone needs to know; #1 – they do not “love” us. They are not loyal like a dog and live for the moment that you pull up in your driveway. Horses operate on respect and a mutually agreed upon pecking order. Hierarchy is established over and over again in any herd, as the leader can change frequently. #2 – Horses cannot speak our language, nor can they learn to think like we do, or communicate in any way that humans do. Therefore, it is our responsibility to learn their language, so that we can communicate with them and they can do as we ask. Herein lay the incredible learning opportunities for us mere humans. #3 – horses are flight animals. They are prey, not predator, therefore their instinct tells them to run from danger, not fight it. They are blessed with speed and an uncanny ability to sense danger long before it has approached. Their innate fear, however, can cause a cornered horse to strike out and hurt whatever, or who ever, is in their path, even themselves, on some occasions. When they are afraid, they often lose their sense of self-preservation, even though they are trying to preserve their life! Backwards I know.

With the “natural horsemanship” movement, much more has been learned about how a horse thinks and what we need to do in order to “get in their head”, so to speak. If you can control a horse’s mind, you can control their body. If you control a horse’s mind, you can tell him where to go, and then in his mind you are superior, because you have the ability to get him to move his feet. Only another dominant horse can accomplish this, so you become “the alpha mare” to the herd.

When a horse accepts the fact that you are the leader because you control where he does and doesn’t go, your whole relationship changes and that horse will begin to follow you around at liberty. Respect is the basis for teaching a horse successfully. Without respect, the horse is a dangerous animal, because he either fears you, which can be deadly, or he has total disregard for you, which can also be painful.

One of my first experiences with “starting” a horse (which used to be called “breaking”) was back in my mid-thirties. Of course I thought I knew it all, but this horse quickly taught me that I knew nothing. At least not compared to him! He was already 9 years old and had not been ridden yet, but he was calm and within a couple of months I was riding him. He took to it well, but he was somewhat timid, having not yet been given the confidence that every horse needs to go out into the world with only a human for company. When he would become worried about whatever we were approaching on the trail, he would stop and refuse to go forward.  I’d kick him and kick him, and still he’d refuse. I would try to prevent him from going to either side in order to avoid going forward, and if he backed up, he would get in trouble, too. So he would rear up. This happened time and time again and I would get angrier every time. In my mind, he was just being obstinate and difficult. Couldn’t he see that everything was fine? Why couldn’t he just think like me and understand?

One day, I just gave up. I let him back up to where he was comfortable and then we just sat there. He was far enough away that he wasn’t worried anymore, so we just sat. After awhile he started walking forward again, completely on his own.

Light bulb moment #1! He needed to figure it out on his own time, instead of on my schedule. By trying to force him to go forward before he was ready, he felt like he had no way out, but up, since I was essentially blocking any sideways or backwards movement. Once given the opportunity to do it on his own time, he stepped up to the challenge and the rearing behavior went away, since he no longer felt the pressure.  This lesson taught me to quit being “the enforcer” and just let things happen in their own time.  We don’t have to control every situation in order to get where we want to go – a valuable lesson both in life and in business.

Make the wrong thing difficult and the right thing easy.

One of the things that people in the equine community might hear frequently from natural horsemanship clinicians is “Make the wrong thing difficult and the right thing easy”.  Translated to normal-people speak, this means that if you’re asking a horse for something in particular and he’s not giving it to you, make him work a little harder. That means get his feet moving faster and cause him to expend some extra energy. Then, we he does give you the right answer, which he will, because he will try different things in order to quit working so hard, you reward him by letting him rest.  Horses are smart enough to figure out that after this happens a few times, and his lungs are burning, he will quickly associate what the correct behavior is with being able to rest. Guess what? People are smart enough to figure this out, too!

Light bulb moment #2! This principle works wonders with teenagers! Now of course I’m not suggesting that we make our kids do 100 pushups every time they do something wrong – even though it works for the army – but, the theory is that if they are behaving badly, make their life a little uncomfortable for awhile. Take away the cell phone, the computer, the iPod…..whatever their most prized possession is for that moment, and voila! The wonderful teenager you knew was there will soon reappear. For my kids, it was cleaning horse stalls. They don’t share my love for anything equine, so when they needed a little attitude adjustment, stall-mucking they went! They hated it, which of course, I relished. It worked wonders and saved my back at the same time.

Just like people, not every horse is the same. 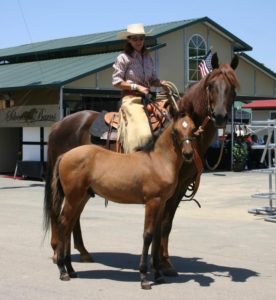 Horses think for themselves, have definite likes and dislikes and their personalities are very unique. What works for one horse, may not work for another. When training horses, just like teaching a human, there are certain methods that are standard and most horses will figure these out quickly. Sometimes, however, one comes along that just challenges everything you do and how you do it. The key is recognizing this quickly and leaving the frustration outside the gate. Taking this personally will get you nowhere.

Some might have a difficult time realizing that they need to adapt their methods to the horse, instead of the other way around. Once you understand this however, life becomes so much easier for all involved. Simply put, if something isn’t working, try a different approach. If there’s a hole, look to yourself first, not the horse. The horse is only as good as the information it’s given, therefore if he’s missing something, you have failed to provide him enough information to do as he was asked. It’s a no-brainer, but a difficult concept for some nonetheless, myself included once-upon-a-time.

Light bulb moment #3! “Would this work on my teenagers?” (Feel free to substitute the words ‘employees’, ‘husband’, ‘mother-in-law’ here). The thing about it is, they don’t realize that you’re still manipulating the situation to get what you want or need. You’re just adapting your methods in such a way that the person you’re dealing with can actually figure out what it is you want and then give it to you! Everyone wins. You’re happy because you got what you needed. They’re happy because they were able to give it you, and everyone’s calm and relaxed, because there was no drama.

Which brings me to……

…..the real reason for all of this…..no drama! In horse training, we always try to end the session on a good note. The horse should be more relaxed and calm at the end then he was at the beginning. The calmness brings with it a sense of accomplishment and a peace, knowing that we’ve learned something. We’ve solved a problem and we are just in a better place than we were before we started. Every situation brings with it the opportunity for learning and growing and for figuring out better ways to communicate with everyone – and everything – we come in contact with.

This website uses cookies to improve your experience while you navigate through the website. Out of these cookies, the cookies that are categorized as necessary are stored on your browser as they are essential for the working of basic functionalities of the website. We also use third-party cookies that help us analyze and understand how you use this website. These cookies will be stored in your browser only with your consent. You also have the option to opt-out of these cookies. But opting out of some of these cookies may have an effect on your browsing experience.
Necessary Always Enabled
Necessary cookies are absolutely essential for the website to function properly. This category only includes cookies that ensures basic functionalities and security features of the website. These cookies do not store any personal information.
Non-necessary
Any cookies that may not be particularly necessary for the website to function and is used specifically to collect user personal data via analytics, ads, other embedded contents are termed as non-necessary cookies. It is mandatory to procure user consent prior to running these cookies on your website.
SAVE & ACCEPT